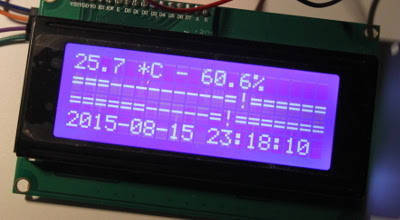 I have a collection of old books and a basement to store them in. But in fact, I don't do that yet, because I had a suspicion that storing them there would not be healthy to the books. Old books and too much humidity don't go well together, especially if you want to keep the books in a pristine condition.

I could, of course, just go to the nearest builders merchant and get a cheap hygrometer for something like €7-15. But I wanted to track the humidity level over a period of at least a week, to see if factors like day/night conditions and changing weather (not to mention the tumble dryer in the next room) have any measurable effect on the level of humidity in the basement room.

Therefore I decided to build a humidity and temperature meter with logging capability from a Raspberry Pi and a few bits of electronics.

The device logs temperature and relative humidity to a csv file which makes it easy to import the log file into a spreadsheet or similar, and in turn have nice graphs and charts with all the bells and whistles that I like to have.

The Parts and Pieces I Used

Most of the electronic parts I found on Ebay, but your local electronics store should also have most, if not all of them. 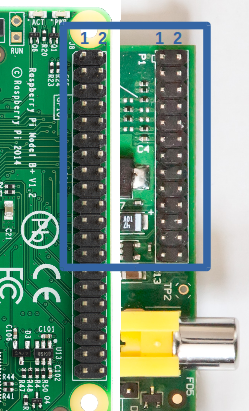 Pi 1 B+ and later models have more
GPIO pins than the older models,
but the first 26 pins are the same.

I hooked everything up via a breadboard so that I didn't have to solder anything, but if you want to make this into a more permanent solution, you might want to solder everything up and put it in a nice box.

We will need to use the Pi's GPIO pins. Raspberry Pi 1, rev A and B have a 26 pin GPIO, while Pi 1, rev B+ and Pi 2 have a larger 40 pin GPIO, both located at the long edge of the board with pin 1 and 2 towards the corner. The first 26 pins are exactly the same on all Pi boards, and since we don't use any of the "extra" pins, the setup is the same no matter which Pi you have.

Hooking up the DHT22 Sensor

The DHT22 is a very inexpensive sensor that can be attached to an Arduino or a Raspberry Pi. With it you can read the current temperature and relative humidity percentage from your own Python scripts.

Hooking it up to the Pi is quite simple. The DHT22 sensor have four pins. Pins 1, 2 and 4 are connected to pins on the Raspberry Pi's GPIO, while pin 3 is not used. You will need to put a 10 ㏀ resistor between pin 1 and 2 on the DHT22. Here are the details:

Below is a diagram of how I hooked it up via a breadboard. You'll notice I connected the Pi's ground (GND) pin to the "minus" rail on the breadboard which will allow me to better connect the GND pins of more components later on without having more cables going to the Pi. Actually I didn't connect wires to the sensor and the resistor like the diagram suggests; I just plugged them directly into the breadboard. 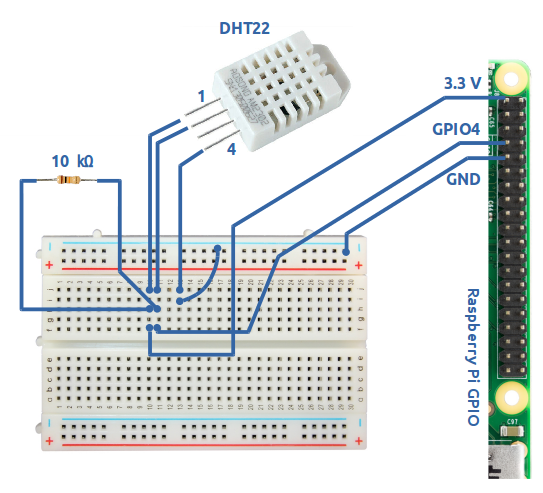 Hooking up the LCD Display

The LCD display is capable of showing four rows of 20 characters and when connected to your Pi, you will be able to send text to it from your Python scripts. This particular one has an i2c board attached which means we can connect it to the Pi in a relatively simple manner.

In order to connect it to the Pi, we will have to use a logic level converter, because the Pi has 3.3 V logic while the display uses 5 V. The converter must go in between the Pi's GPIO and the LCD. Here are the details:

Since the converter fits right onto the breadboard, the far easiest thing to do is to just plug it right on there. On the breadboard diagram below you will notice that again I use the minus rail for ground, so in this entire setup, I have only one wire going to a GND pin on the Pi. 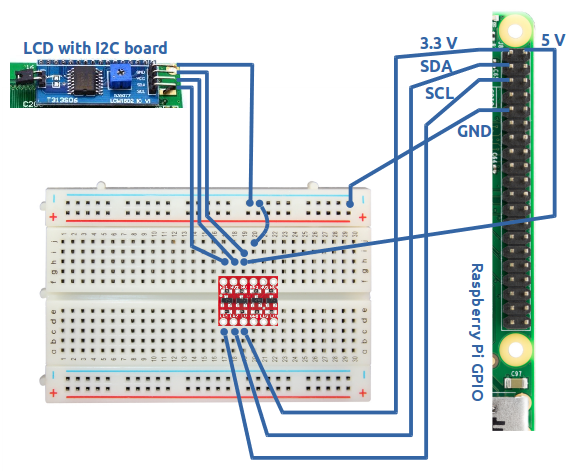 Enlargements of the pins of the I2C board on the display (left) and the converter (right).

When you have everything connected, it's time to boot up your Raspberry Pi. With a running Raspbian, open a terminal window (or SHH into the Pi from another computer), as we will install the necessary software by text commands.

First up, we will install some dependencies:

Then, we will download and install the Adafruit Python DHT library which will enable us to write Python code that reads temperatures and humidities from the DHT22 sensor:

As for preparing the display, the process is slightly longer. First, we will make sure that the required modules are read on system boot. We do that by loading the file /etc/modules in our favourite text editor. In this example it's the text based, but easy to use, editor nano, but if you have the Pi running with a graphical environment, you may want to change "nano" into "gedit" to get a graphical editor:

Add the following two lines, then save the file and exit the editor:

Now, reboot the Pi and then start up the terminal again:

Load the following blacklist file in an editor. There is a line "blacklist i2c-bcm2708" -- put a # in front of that line, save the file and exit:

Again, reboot the Pi and then start up the terminal:

Now, we need a couple of driver files for the display. I put them in a file archive which you can download for convenience. Create a directory that will contain this, change to it, download the archive file and decompress it like this:

You'll see that I also put my Python script called "temperature.py" -- which polls the sensor and writes its output to screen and to the display -- into the archive file. We're almost ready to run this script, but first we need to make sure that we use the correct I2C address for the display. Now you must run ONE of these two commands, depending on whether your Raspberry Pi is Rev 1 or Rev 2:

By doing this, you will get an output similar to this:

From this you can see that I have a device with address 1b which is in use ("UU" denotes this), while the display is at address 3f. Your device might use another address. If in doubt, this should be noted in your display's spec listings.

We will need to tell the lcddriver at which address it can write to the display, so open up lcddriver.py in your favourite editor:

Then scroll just a bit down to the line that says "ADDRESS = 0x3f", and if you found that your display's address was anything else than 3f, you need to change "3f" into that address at this line. Then, save and exit the editor.

Now you should be able to run the Python script and let it query the sensor and give you the current temperature and relative humidity:

You can stop the script by pressing Ctrl+C in the terminal.

Letting the script start automatically with the Pi

In order to make this a headless setup, we need to make sure that the script is started every time the Pi starts up. Also, if the script is to run automatically without a screen (other than the display) attached to the Pi, we would need a small "launcher" shell script that runs the Python script properly, while it redirects screen output to a file (templogs.csv) for you to grab later and feed into e.g. a spreadsheet for nice graphs, etc. Therefore, create such a shell script in your editor:

And then paste the following lines into that new file (assuming your username is "pi" and the directory you created above was "temperature" as suggested):

Now we need to tell the operating system that this launcher file needs to be executed at every system startup. We will let cron handle this -- a system that runs on all Linux systems, letting users run programs and scripts at specific incidents or times. Add such a "crontab job" by executing the following command, which will in turn start up your default editor (probably nano):

Scroll down to the end of the file and on a new line write the following:

Save and exit the editor, and you're ready to reboot the system and see your Pi automatically start logging temperature and relative humidity every time you boot it. For a quick reboot, do:

As mentioned, the launcher.sh script will redirect output to a csv file on the format "date/time;temperature;humidity", i.e. three fields separated by semicolons, each entry on a new line. Temperature is in degrees Celcius (°C).

As for my own basement, I discovered that relative humidity there might actually be slightly too high. Generally it sits in the high 50es percent, whereas apparently experts recommend 30-50% for storing books. So this means that I will probably have to do something about it, if I follow through on my plans on actually storing books there. 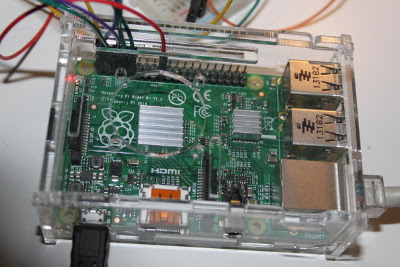 Although I think this project was fun to build, there is a lot of potential for future add-ons. Here are just a few that I thought of.

If you liked the tutorial, please consider donating an amount of your choice, to the Bitcoin address or using the PayPal button to the right.

Disclaimer: Use this guide at your own risk. The author of this guide is in no way responsible for any damage to you or your hardware that might occur from following this tutorial. Please note, that this is a description of what I did to make it work; not how it will work for you.