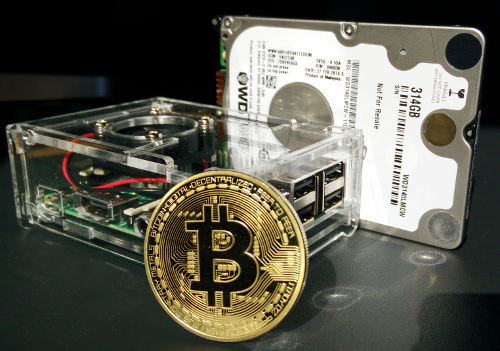 For a long time the Raspberry Pi has seemed tempting for people who wanted to run a full node on the Bitcoin network because of its small size, low power use and cheap price-tag. With their relatively low performance specs, the first generations of the Pi were really not quite up to the task, though. Some people were able to compile and run Bitcoin Core (this very blog, for instance), but only barely, and others didn't succeed in making it work at all.

This has changed to the better with the newer generations of the Pi. The Raspberry Pi 2 and especially the Raspberry Pi 3 have more RAM and multi-core processors. While we're still far from modern desktop computers, of course, you're much better off with the current specs than before. That being said, syncing the blockchain can still be quite painful on a Pi 3.

With the blockchain growing larger and larger, you basically have two options. One option is to have enough storage space to contain the entire blockchain (and then some), be it by means of a really large Micro SD card, a Western Digital PiDrive like explained here, or a large USB pen-drive. The other option is pruning the blockchain, which became available in the Bitcoin Core software recently. Pruning is basically storing only the most recent part of the blockchain, and cutting away everything else.

Also, for Ubuntu, pre-compiled binaries of Bitcoin Core and its dependencies have been made available for the Raspberry Pi, which has made the process much easier since you no longer have to compile yourself if you don't wish to go through the trouble.

This guide will show how to set up a complete headless full node system with a Pi 3, either as a pruned node, or using a Western Digital PiDrive (or another USB harddisk) to store the blockchain. A Raspberry Pi 3 with a connected PiDrive will consume around 3-4 watt of power. A pruned node on just the Pi 3 is just above 2 watt. Compare that to the 100-200 watt that is consumed by a typical desktop computer running Bitcoin software with the screen turned off.